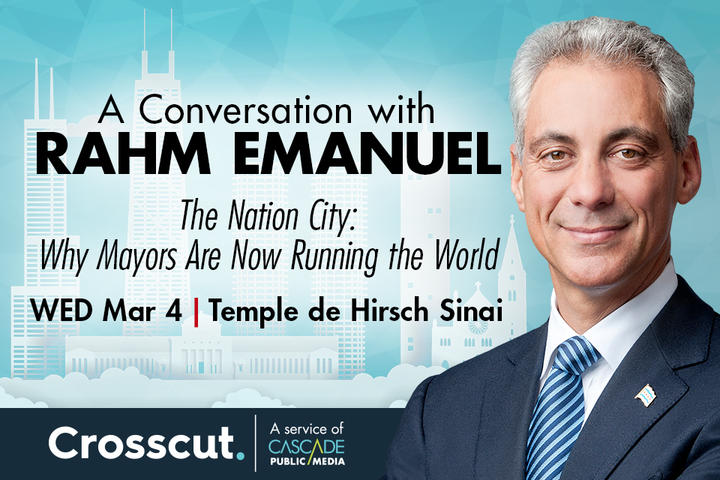 Crosscut and Elliott Bay Books welcome Rahm Emanuel to Temple de Hirsch Sinai for a conversation surrounding his new book The Nation City: Why Mayors Are Now Running The World. Emanuel, the former two-term mayor of Chicago and White House Chief of Staff for President Obama will discuss how cities, rather than the federal government, stand at the center of innovation and effective governance.

Your ticket includes a copy of The Nation City.

General admission - $35 (includes a copy of The Nation City)

**Please note that refunds will only be accepted up to February 1st, after that date all ticket sales are final.**

About The Nation City:

In The Nation City, Rahm Emanuel, former two-term mayor of Chicago and White House Chief of Staff for President Barack Obama, offers a firsthand account of how cities, rather than the federal government, stand at the center of innovation and effective governance. Drawing on his own experiences in Chicago, and on his relationships with other mayors around America, Emanuel provides dozens of examples to show how cities are improving education, infrastructure, job conditions and environmental policy at a local level.

Emanuel argues that cities are the most ancient political institutions, dating back thousands of years and have reemerged as the nation-states of our time. He makes clear how mayors are accountable to their voters to a greater degree than any other elected officials and illuminates how progressives and centrists alike can best accomplish their goals by focusing their energies on local politics. The Nation City maps out a new, energizing and hopeful way forward.

Rahm Emanuel was the forty-fourth mayor of Chicago, serving two terms from 2011-2019. He previously served as President Obama’s Chief of Staff and as chairman of both the Democratic Congressional Campaign Committee and the House Democratic Caucus. He is a contributor to ABC News and lives in Chicago.

Please reivew our Event Code of Conduct. Should you have any questions, please contact andrea.omeara@crosscut.com