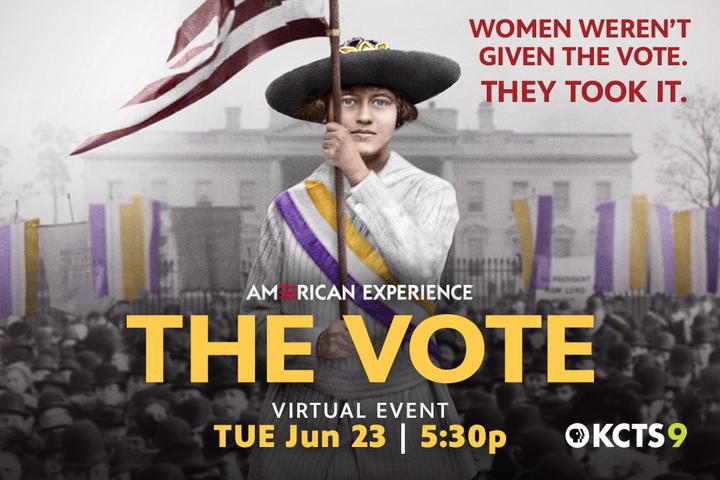 Join KCTS 9 on Tuesday, June 23rd as we (virtually) sit down with some extraordinary women to discuss the past, present and future of women's rights and the suffragette movement of the early 1900's. Panelists include President of the K.D. Hall Foundation KD Hall, community organizer and attorney Nikkita Oliver and Executive Director of Amplifier Cleo Barnett. Moderated by Crosscut Now host Starla Sampaco.

This discussion will center on the black women of the suffrage movement and how women (and everyone else, for that matter, of all colors) can currently affect change as it pertains to racism/dismantling white supremacy through voting.

We want to elevate the voices of Black women in this conversation as part of our commitment as an organization to being part of the change.

This event is produced with American Experience in advance of The Vote, premiering on KCTS 9 on July 6th. Click here to watch the trailer and suffragette profile videos in advance of this event.

We want to hear from you! Help us shape this event by sending in your questions for the panel. Send in your thoughts to hsteele@kcts9.org and we'll be in touch if we plan to ask your question during the event.

By RSVPing, you agree to receive occasional membership and event emails from KCTS 9.

Starla Sampaco (moderator) anchors daily segments on KCTS 9 for Cascade Public Media as the host of Crosscut Now. Previously, Starla worked as a legislative reporter for TVW and later as a technology reporter for GeekWire. Outside of Cascade Public Media, her latest venture is Career Survival Guide, a video series that helps early-career women and professionals of color navigate workplace challenges. She created the series after noticing a serious problem throughout her career: Women and people of color face unique barriers to professional success, and many feel unprepared to face these barriers upon joining the workforce.

Cleo Barnett works at the intersection of storytelling and human rights. Currently based in Seattle, Washington, originally from Tauranga, New Zealand, her practice is deeply grounded in the dualities within this diaspora and her connection to the communities she is building in collaboration with. Experimenting within cinematography, public art curation, campaign building, and space-based installations, Barnett's work archives her communities' desire and movement towards collective liberation and healing. Cleo is currently the Executive Director of Amplifier, a non-profit design lab that builds media experiments to amplify social movements. Her work has been featured at the Brooklyn Museum, The New York Times, NPR, VICE, CNN, and elsewhere. Cleo holds an M.A. in Art and Public Policy from New York University, and a double B.A. in Political Science and International Business from the University of Auckland.

KD Hall co-founded KD Hall Communications in 2013 and has since been extremely impactful across corporate and government sectors. As a result, Kela and the KD Hall team have been invited to the White House, received 10 proclamations, and successfully guided 24 students through an internship for the Inauguration of Women on the Rise Season 1 and Women on the Rise Season 2 as well as two Women’s History Month conferences. Women on the Rise addresses equity for women, which is a very important cause to Kela and KD Hall Communications. She has a raging futuristic old school vibe that distinguishes her from the rest. As Kela continues to grow with KD Hall, she also hopes to increase the reach of the company. Goals of global growth, college partnerships, and educational facilities are only the beginning for this old school ambitious millennial leader. In Kela’s personal life she is the mother to her name sake Kela Hall Jr. and is expecting baby number two with Co-founder David in May 2018.

Nikkita Oliver is a Seattle-based creative, community organizer, abolitionist, educator, and attorney. Working at the intersections of arts, law, education, and community organizing she strives to create experiences which draw us closer to our humanity. Her work asks us to engage what we see happening now and to imagine what we hope to see in the future. She has opened for Cornel West and Chuck D of Public Enemy, featured on the Breakfast Club, performed on The Late Night Show with Stephen Colbert, and featured on The Breakfast Club and KUOW's The Week in Review. Her writing has been published in the South Seattle Emerald, Crosscut, the Establishment, Last Real Indians, The Seattle Weekly, and The Stranger. She organizes with No New Youth Jail and the Seattle Peoples Party. Nikkita was the first political candidate of the Seattle Peoples Party running for Mayor of Seattle in 2017. The Nikkita Oliver for Mayor campaign narrowly missed the general election by approximately 1,100 votes; coming in third of 21 candidates. Follow @NikkitaOliver