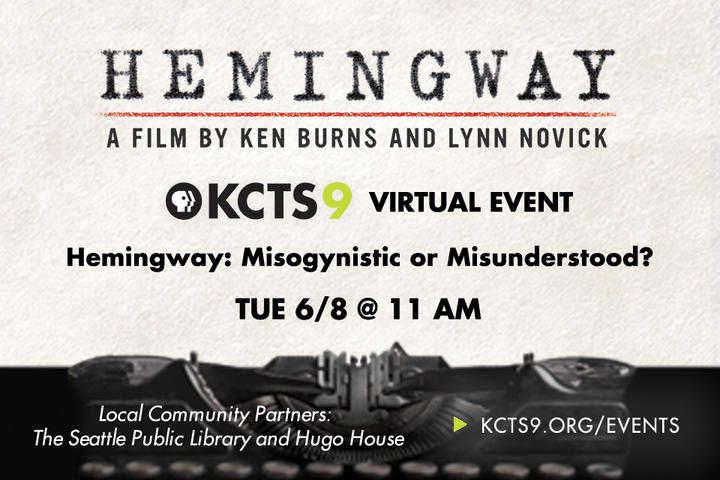 The Ken Burns documentary, Hemingway, examines many commonly-held perceptions of the author and teases out some lesser-known truths. Film producers Lynn Novick and Sarah Botstein will talk about how they immersed themselves into Hemingway’s world while making the film and share insights gained from the experience. Local Hemingway scholar and author Dr. Ann Putnam will share the truths she unearthed while researching and writing an essay for the book Hemingway and Women: Female Critics and the Female Voice. The discussion will be moderated by Dr. Verna Kale, Hemingway scholar and author.

By discussing Hemingway’s relationships with the women in his life and how he portrayed women in his writing, we’ll gain a deeper understanding of the myth vs. the man. The conversation will be structured around audience-submitted questions, so submit yours for consideration in the check-out process when you reserve your ticket. We’ll also incorporate questions submitted during the event.

Thank you to our local community partners:

The Seattle Public Library- check out their Hemingway blog article and podcasts here.

Verna Kale is Assistant Research Professor in English at the Pennsylvania State University and Associate Editor of The Letters of Ernest Hemingway. She has published a critical biography, Ernest Hemingway, part of the Critical Lives series (Reaktion/University of Chicago Press, 2016) and is editor of Teaching Hemingway and Gender, part of the Teaching Hemingway series (Kent State University Press, 2016). She has contributed articles and shorter pieces about Hemingway and/or life writing to The Hemingway Review, The Journal of Popular Culture, The Conversation, River Teeth, Barrelhouse blog, Upstart, Hemingway in Context, and Hemingway and the Geography of Memory. She is the lead administrator of the Hemingway Society Facebook page. Follow her on Twitter (@vernakale, views are hers and not representative of the Hemingway Society) or Instagram (the_dood_abides_psu, almost exclusively pics of her dog).

Lynn Novick has been directing and producing landmark documentary films about American life and culture, history, politics, sports, art, architecture, literature, and music for more than 30 years. The 80 hours of acclaimed PBS programming she has created in collaboration with Ken Burns include The Vietnam War, Baseball, Jazz, Frank Lloyd Wright, The War, and Prohibition— these landmark series have garnered 19 Emmy nominations. One of the most respected documentary filmmakers and storytellers in America, Novick herself has received Emmy, Peabody and Alfred I. duPont Columbia Awards.

Sarah Botstein has for more than two decades produced some of the most widely-watched and acclaimed documentaries on PBS. Her work, in collaboration with directors Ken Burns and Lynn Novick, includes the award-winning epic ten-part series, The Vietnam War, Prohibition, The War and Jazz. Most recently, Sarah was the Senior Producer of the four-part docuseries College Behind Bars, which received two Emmy nominations and highlighted the transformative power of education in a highly effective prison education program in New York State.

Ann Putnam has taught creative writing gender studies and Hemingway at the University of Puget Sound in Tacoma, Washington for many years. Her most recent publication is a memoir, FULL MOON AT NOONTIDE: A DAUGHTER'S LAST GOODBYE (U of Iowa Press). Her essay, "On Defiling Eden: The Search for Eve in the Garden of Sorrows," appears in the collection, HEMINGWAY AND WOMEN: FEMALE CRITICS AND THE FEMALE VOICE. She has made six trips to Cuba and has recently completed CUBAN QUARTERMOON, a novel in which Hemingway often appears.